Reclining airline seats. Love them or hate them? 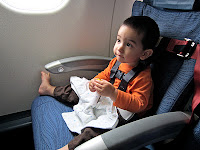 An article in the Travel section of yesterday's Toronto Star The Recline and Fall of Western Civilization has my mind racing.  The article weighs in on the conflicting views travelers have on the etiquette of reclining airline seats.  Whether you love them or hate them, it is clear most people feel passionately either way.

I have never been a fan of reclining airline seats.  Unless I have had the fortune of sitting in first or business class, reclining seats rarely provide any additional comfort.  And, in these days of steadily reclining seat pitch, the inch or two of space lost when a fellow passenger reclines his/her seat feels intrusive and claustrophobic.  Now that we are traveling with a child, this lack of space has become more of an issue.

Last year we flew to Hawaii.  Because of the long flights from Toronto, we purchased B his own seat and brought along his car seat so he'd have a comfy, familiar place to sleep.  The down-side of a car seat on board is they raise the child up so that it is almost inevitable their feet will touch the seat ahead of them.  On our first leg, the distance between seats was so minimal, I tapped the young man on the shoulder who was sitting in front of B, and gave him a heads up that although we were sorry for the inconvenience, he would not be able to recline his seat because our son's feet would be squashed.  To my amazement, even though this was a daytime flight, he was less than understanding, and his mother seated next to him spent the next several minutes complaining to the flight attendant how unfair it was he could not recline his seat.

On the second leg, the distance between the seats was even tighter.  The (yet another) young man seated in front of B insisted on reclining his seat, despite my polite pleadings.  B's feet were so crushed up against the seat in front, we spent most of the flight with his car seat sitting sideways while Mark and I were jammed in the remaining seat and a half of space.  So much for safety...

Thankfully on our return flights, we were seated in the bulkhead row.  Though this presented other problems (see Are bulkhead seats worth it?), at least we didn't have to deal with reclining seats.  On other flights, we have been incredibly fortunate to have understanding passengers seated in front of B.  But this understanding is definitely a two-way street - we don't want to inconvenience another passenger any more than they want to be inconvenienced, and we do our best to make sure B disrupts other passengers as little as possible.

These experiences have made me particularly mindful when I think about reclining my own seat.  Now that B is over two, we usually bring along the Cares flight restraint system, which allows him to sit securely in the airplane seat, and keeps his feet far enough away from the seat in front of him.

Do passengers have the right to recline their seat?  Sure they do.  But given the large number of people crammed in such a small space, showing a little consideration to your fellow passengers is paramount.

So I've got a little request of everyone next time you fly... if you are thinking of reclining your seat, please look behind you first.  The passenger behind you may be very tall, may be very small (and in a car seat), or even just an exhausted parent bent over trying to retrieve a toy off the floor (if I had a nickel...)  Ouch!
Posted by Allyson_RDHarrisCrew at 9:40 PM