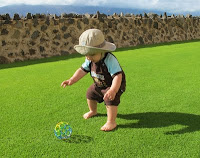 The O Ball by Rhino Toys is my favourite travel toy - you can throw it, kick it, bounce it and it you can fold it and pack it virtually flat.  It weighs next to nothing, and as we learned in , won’t get picked up by the wind and carried away like a beach ball.  It was easy for B to hold on to when he was small, and you can clean it in the dishwasher.  We bought it in Toronto for $7.99 at Chapters, and they sell them at Mastermind too.


Ikea's Mula Nesting cups are only $3.  You can nest them, stack them, put stuff in them, hide stuff under them, use them as sand toys and in the bath, and they take up hardly any room.  Other toy makers sell them too, but I like the Ikea set because they have small holes in the bottom, so when you use them in the bath, you can watch the water drain out (i.e. one drains like a shower head, another has three holes, others just one small hole) which adds to the amusement.  B enjoys using them as hats, talking into them and holding the edge of a cup in his teeth and walking around like he had a big pig’s nose. We have fun making towers with the cups and then knocking them down.  We add the O Ball to the stacking fun to build more interesting towers.

These toys entertained B as much on our most recent trip, as on our first.  If you have come across any good travel toys, let me know!
Posted by Allyson_RDHarrisCrew at 2:00 PM